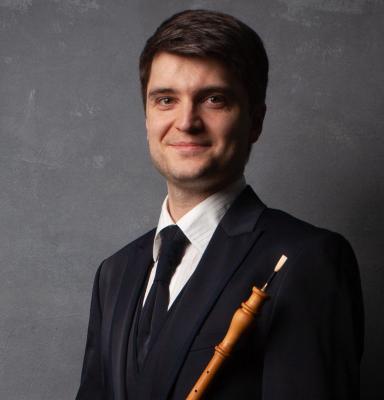 Originally from Montreal, Daniel Lanthier leads an international career, frequently touring in Europe, America and the Middle East with renowned ensembles such as Les Musiciens du Louvre (France), Concerto Köln (Germany), Gaechinger Cantorey (Germany), Concerto Copenhagen (Denmark), Musica Aeterna (Russia) and Il Giardino Armonico (Italy). He has recorded numerous CDs under the labels Harmonia Mundi, Atma, Berlin Classics, Warner records and Sony Records. As a soloist, he regularly performs in France, Germany, Denmark, United Kingdom, Netherlands and Canada. Daniel Lanthier studied at the Conservatoire de musique de Montréal, the Royal Academy of Music of London and the University of Tel Aviv. He went on to specialize in early music with Alfredo Bernardini at the Conservatory of Amsterdam. He currently lives in the Netherlands and teaches baroque oboe at Utrecht Conservatory. Daniel is regularly invited to give masterclasses and lectures at the Conservatoire de musique de Montréal, the Royal Conservatory of Den Haag, the Conservatory of Groningen and at the summer school of the Ochsenhausen Monastery in Germany. Thanks to the support of the Canada Council for the arts, Daniel studied the making of baroque oboes in 2021 and he is currently copying an oboe by Carlo Palanca, eminent instrument maker of the 18th century. Daniel Lanthier will play Mozart Concerto upon this instrument in May 2023 with Arion Baroque Orchestra.