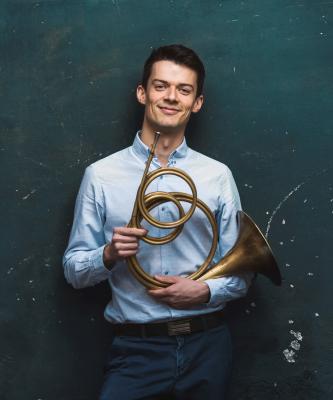 Originally from Quebec, Pierre-Antoine Tremblay pursues a career of horn player specialized in early music practice. His musical activities over the past few years have led him to about thirty countries across the world, working with renowned conductors such as Frans Brüggen, Philippe Herreweghe, Fabio Biondi, René Jacobs, Pablo Heras-Casado, Teodor Currentzis and Raphaël Pichon. He plays regularly with top period-instrument ensembles such as Europa Galante (Italy), the Freiburger Barockorchester (Germany), and Arion Baroque Orchestra (Canada). He also occasionally performs with the Orchestre des Champs-Élysées (France), the Orchestra of the Eighteenth Century (Netherlands), MusicAeterna (Russia), the Festspielorchester Göttingen (Germany), and B’Rock (Belgium).

Recent activities include a recording of Bach’s First Brandenburg Concerto with Concerto Copenhagen, a staged performance alongside Cecilia Bartoli of Handel’s Ariodante at the Salzburg Festival, as well as a Richard Strauss symphonic program with Anima Eterna Bruges.

In 2014 he cofounded in Barcelona, with clarinetist Lorenzo Coppola and pianist Cristina Esclapez, the Dialoghi Ensemble. Their first recording of Mozart and Beethoven will be released by Harmonia Mundi in August 2018. In the next few months, the group will be performing in Poland (Warsaw Chopin Festival), Norway, Japan, and Singapore.

Pierre-Antoine was invited to give masterclasses at the conservatories of Brussels, Madrid, Singapore and Amsterdam.

He obtained a Master’s Degree in Early Music from the Conservatory of Amsterdam, where he studied with Teunis van der Zwart.