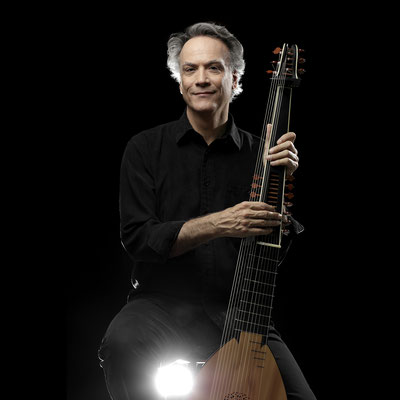 Described as “a supremely refined, elegant, cerebral musician” (Ottawa Citizen), Sylvain Bergeron is a master of the lute and plucked strings family of instruments including theorbo, archlute and baroque guitar. He is in high demand on the North American music scene as a soloist and continuo player. Wholenote Magazine declared, “Sylvain Bergeron is a brilliant musician who weaves an unforgettable aural tapestry.” Bergeron is the co-founder and co- artistic director of La Nef and has been at the helm of many of the Montréal-based ensemble’s award-winning presentations, including Joan the Mad, Perceval, and Montségur.

His discography includes more than 70 recordings, many of which have earned awards and awards.  Bergeron’s first solo album The Balcarres Lute Book was released on ATMA Classique in 2008 and was widely acclaimed for “solid lute technique combined with an uncanny musical intellect and impeccable phrasing” (Wholenote Magazine), while Goldberg Magazine described Bergeron’s playing as “rhythmically vital yet full of dedicacy and nuance.” His most recent solo record, Gioseppe Antonio Doni's Lute Book, published by ATMA Classique in 2015, was widely praised for its "solid lute technique combined with outstanding musical intelligence and impeccable phrasing" (The WholeNote ).

Sylvain Bergeron teaches lute, baroque guitar, theorbo and continuo at McGill University and the University of Montréal. He has given numerous lectures, workshops, and master classes, and has participated on several music competition juries. As a specialist in early plucked instruments, he is often consulted for various recording and publishing projects.